A great many years ago my great grandfather and his best friend decided to travel to western canada to find work. They first traveled to Winnipeg where they were told they could find a good job with the drop of a hat. Once they got there, they heard that there were even better opportunities if they went further west. So further west they ventured.

They reached Saskatoon and discovered that the jobs weren’t as fruitful as they expected. Then they heard that if they continued further west, they could find easy pay they sought. Onward they went.

They reached Edmonton and found the trend continued, while the jobs they discovered were reasonable, they were told they could find even better jobs if they just went a bit further west. The journey continued.

They reached Vancouver where they found reasonable jobs, yet still, if only they went further west, they would be paid marvelously for their work. And so they decided to continue on Vancouver Island. However their travels had consumed most of their money and so only one of them would be able to go to the island. My great grandfather and his friend decided to toss a coin. Whomever won would go to the island first and could then send some money to bring the other over on the ferry.

They tossed a coin.

His friend boarded the ferry, saluted and left my great grandfather alone in Vancouver, waiting to receive the money to get over to the island.

The next morning my great grandfather went for a stroll and heard the latest news buzzing about the city. In the middle of the night the ferry to Vancouver Island sank, all aboard lost. 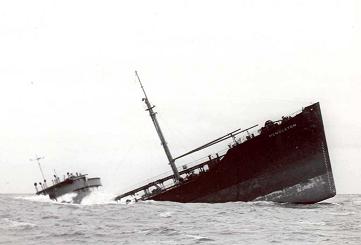 And so I can trace my existence and the existence of an entire branch of my family down to the outcome of that single coin toss. Certainly if my great grandfather had won, he would have very likely perished with everyone else and I would not be here today.