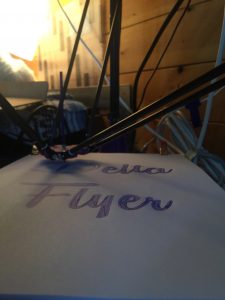 And here’s a video rendition. I’ll add that I print throught Octoprint (using OctoPi), it’s wonderful and Cupcake155 (my first printer) has used it for a long time. I, of course, go through Wifi too.

I’ve posted various photos up to this point in my Album for Delta Flyer’s initial life on Flickr here.

I think it was a great idea to calibrate the motion through a pen before going 3D. Had I skipped that, I probably wouldn’t have suffered a lot, but in the event of a measurement error, I think it probably saved me a lot of grief.