Since you’re on my website, you likely know who I am. But maybe you have amnesia or something.. Otherwise perhaps you’re a prospective stalker new friend.

Here are the basics: Most real world people call me James T Snell. On paper, I’m a Computer Scientist who decided that a solid additional tinge of Computer Engineering would make for an especially eccentric geek. Hey, someones’ gotta build Yoshimi’s Pink Robot.

To be real, I like to learn about as much as I can & I spend much spare time on hacking (the honest kind) projects. I like trying to expand my understanding of the world and get to know whomever presents themselves along the way.

If you’d like to reach me, my generally preferred medium is email. Please go ahead and email me by reversing these and sending away: {@dawning.ca, me} – I hope that weirdo formatting fools enough robots and hardly any people. Additionally, I can be followed via twitter & facebook.

Another option is to jump on to my direct contact form and email me from there.

In the last year or so I’ve really dived in to Hardware Development as I’ve found that expecting school to teach me exactly what I want is a pointless waiting game. You can see some of the projects I’ve blathered about more publicly over on my Projects section. As I continue my life journey to discover who I am, I’ve recently uncovered that there’s a hacker under my skin. I mentioned that above, but let me add that I haven’t honed any skills for breaking things, but rather for building things and bending them to get things done. Sadly Hacker’s have a rough rep right now because of a few misguided individuals. Nevertheless, my particular flavour of Hacker has recently been given the grace of a name – I’m what’s called a Hard Hacker. 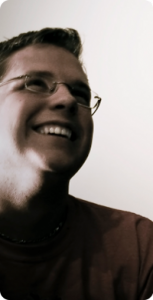 Like any good mad scientist, I’ve always got some projects on the go. I try to document the particularly cool ones in my project section. Lately I’ve been dabbling in making my own circuit boards (yay backyard-chemistry!). I’ve also been doing more web development lately, particularly focused on WordPress and Django projects (I’m still really new to Django). I’ve found myself continually interested in goofing with Arduino based projects, so that’ll continue for awhile.

Don’t ask me what the end goal of it all is, that is, once I finish building Thunderbird 2. Do I really need a reason to goof around? (The answer is “no”).

I setup this website around a foundation of WordPress. Beyond that, you may notice that I make use of various externally sourced components such as YouTube, Facebook and various other subtle sources like Google Calendar.

All the plumbing of Dawning.ca is the typical kind of setup, I host the dawning.ca domain from a virtual machine running within my file server. I run the server on Ubuntu Linux running the Apache Webserver. Pretty much a totally standard LAMP setup. W00t for Open Source software! For those heavily teathered to Windows, Mac OS or something else, you could run a setup similar to my own by either taking advantage of Virtualization tools, such as those provided by VMWare. Also, for Windows, the WAMP tool is insanely helpful.

A Tangent on Awesomeness

I used to believe that I was only “cool” if everything on my website was created 100% by me. But of course, I later came to realize that re-inventing the wheel is a pointless pursuit and that I’d do better to strive to hack together already existing and high-quality components. Perhaps the essence of this was captured by Sir Issac Newton’s comment “If I have seen further it is only by standing on the shoulders of Giants”. So those of you who still hand write everything from the ground up, make go take another look at some of those really helpful tools out there like WordPress or Django.

Uh Huh.. So, WTF is this site actually here for?

This site exists to give me a place to post info on whatever the frak I feel like. So that gives it a rather bizarre flavor as my interests are diverse. At present, I’ve created a section presenting some of my projects, another set of pages with a fair number of photos, videos, links to interesting stuff, a nifty page aggregating web cam data from around my city, some of my school notes and a Wiki that’s still getting meat thrown on it’s bones. And of course, you may have noticed the main page has a rather blogful feel tone to it.

If you are so inclined, you’re perfectly welcome to “donate”, perhaps on account of my wonderful toy program STP?

For the stalkers: I’m sure you’ll find all the juicy stuff you’re looking for somewhere on this site.. Let me know if something is missing. Have fun with that, weirdos 😉

For you assassins, you’ll have to try something more inventive if you are to proceed. I’m sure my garbage can out back would be a great place to start, or better yet, head over to the landfill.

Even More Hooks in to my life..