The first phase of my 3D printing project was to get my machine’s motion resurrected.

The second phase, this phase, was to get it printing again; check. 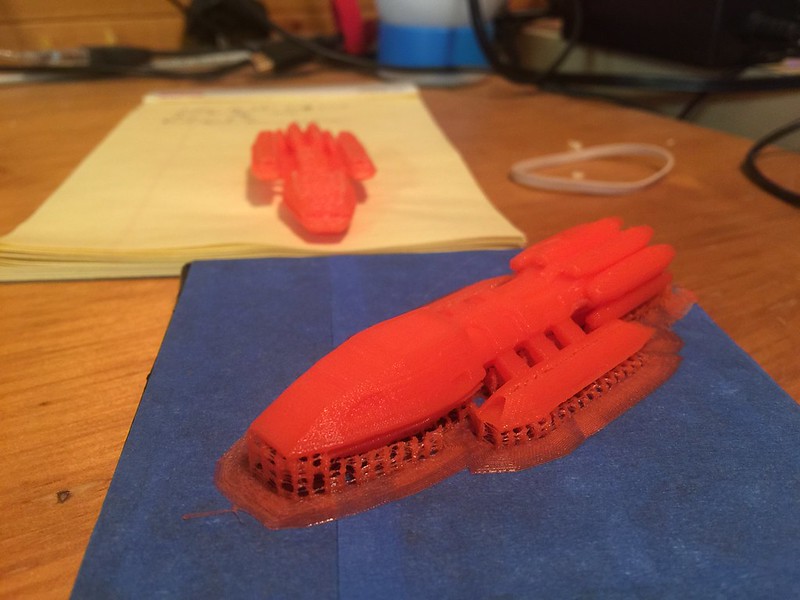 I picked up a RAMBo v1.1 board from RepRapElectro, after receiving a lot of very helpful general support from them over IRC. 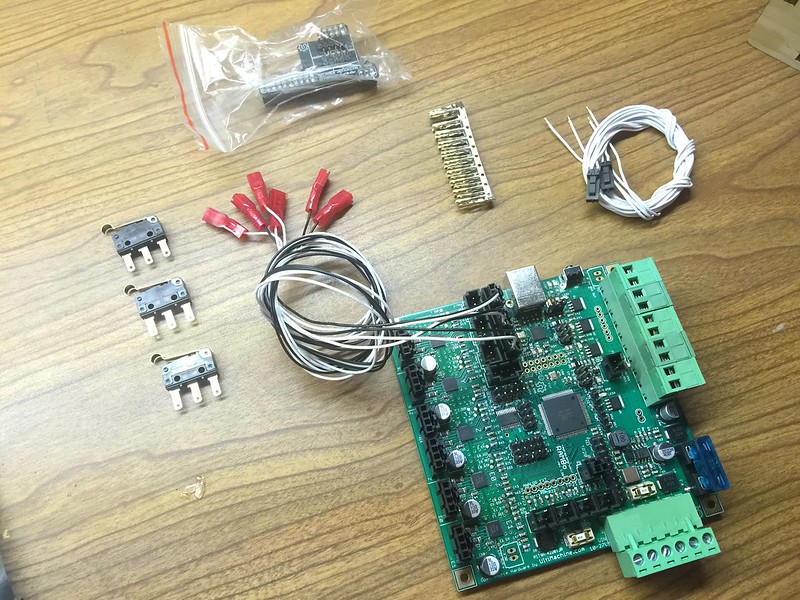 I had to drill some new holes in Cupcake155 to mount it, that went just fine: 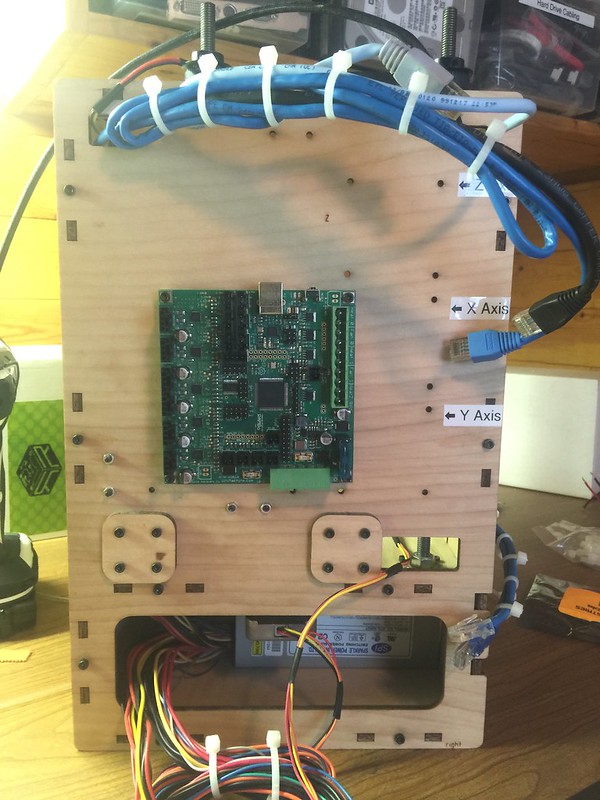 As I wired up, I rigged connectors to keep things generic. I made adapter cables so I have an easy road to my previous equipment. 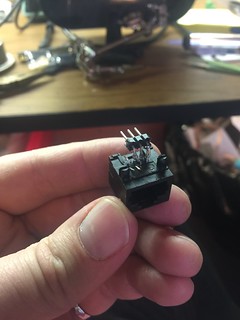 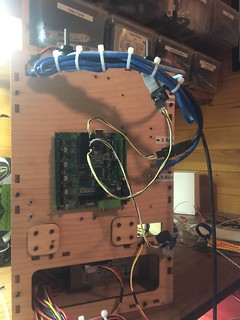 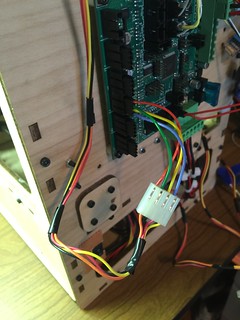 It took me a while to work-out a suitable motor wiring. I didn’t realize that different stepper drivers produce different steps/rotation (though that seems obvious now). Anyway, I found many wiring combinations that work. Here’s what I went with in the long-run:

Here’s a close up of my final cable wiring, including .156 type connector 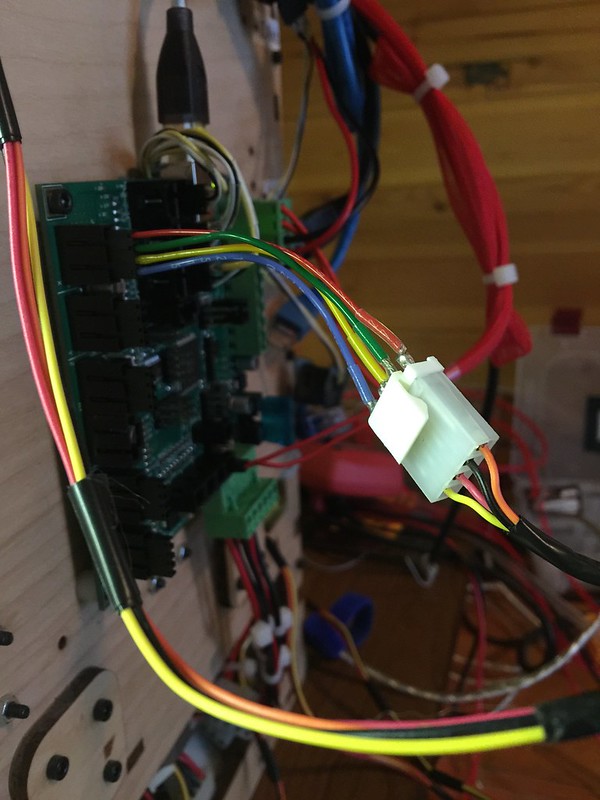 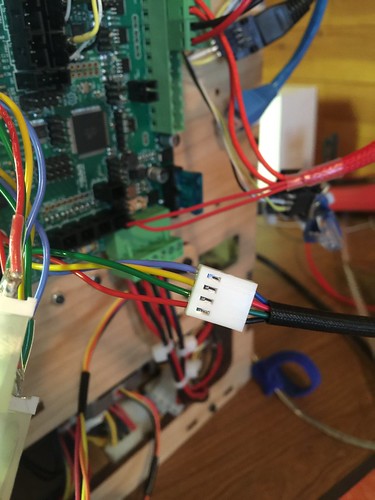 I conquered the mechanical installation of the Geeetech MK8 in Episode 1.

Now for hook-up. I tried various wiring combinations, and found that the MK8 stepper could just be one-to-one connected to the RAMBo board.

As the image to the right illustrates, here’s the motor wiring for Geeetech MK8 to RAMBo:

Beyond the stepper was the thermister and the heater wire, these are near impossible to screw up, so.. Moving on..

As Marlin served me well in Episode 1, with my RepRap Gen3 motherboard, I figured it was only right to keep using it. Especially when considering that the RAMBo came with Marlin 1.0.0 preloaded, and I’ve made a tiny source code contribution to Marlin now too. 🙂

Configuring Marlin for my machine took me considerable effort, loads of careful empirical measurements with my calliper and an iterative approach (I often follow a TCP-inspired algorithm when searching for something optimal).

I’ll be tuning this machine for a while still I’m sure, but it would seem my first 5 days with it in operation have been fruitful.

I started to produce much improved prints once I discovered the gcode, M206 Z-1.0, to manually adjust my Z=0 position (as my Z-end stop fires too early). Also I was screwed a few times by snapping PLA lines during prints, which required a little re-thinking of my spool supporting method.

I’ll add that I ran in to trouble that I’m attributing largely to chasing perfection with my Z=0 location while having a non-level print-bed. My print bed is fairly level on its own, but that means there’s about a 0.2mm variance and well, that’s enough for me to feel, severely (as in-failed prints that could have hurt the printer) 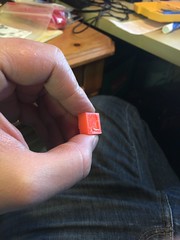 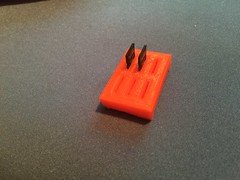 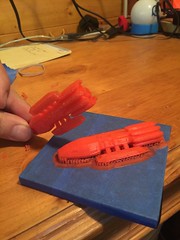 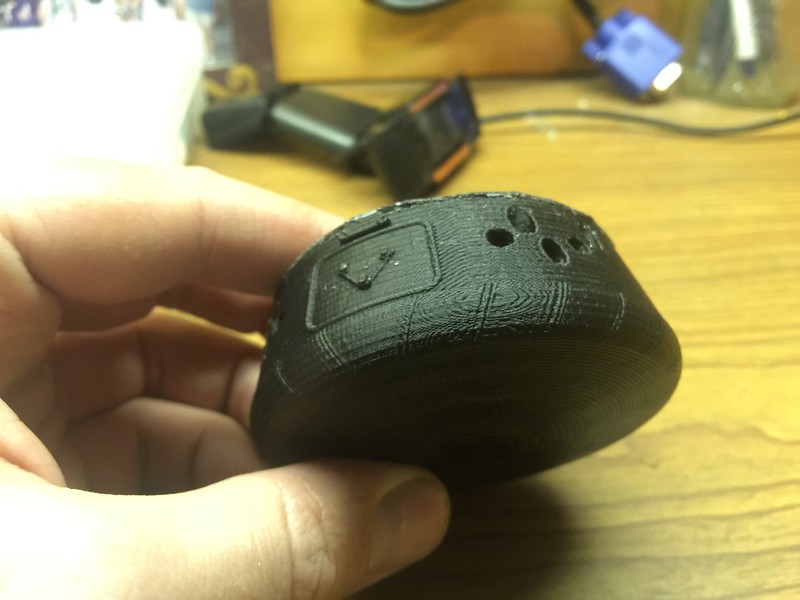 Above is part of a model of the SpaceX Dragon Capsule. Epic. Just epic. 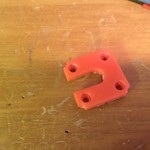 As text-objects, I’ve been printing lots of Z-stage C-clamps for my machine. I have far too many as it is, and will find other Cupcake parts to print when I have further testing/calibration to do.

Interestingly, I’ve only ever used my pliers to hold on to the nuts of these little M3 screws as I’ve worked on this machine. It dawned on me; hey I have a 3D printer now!.. 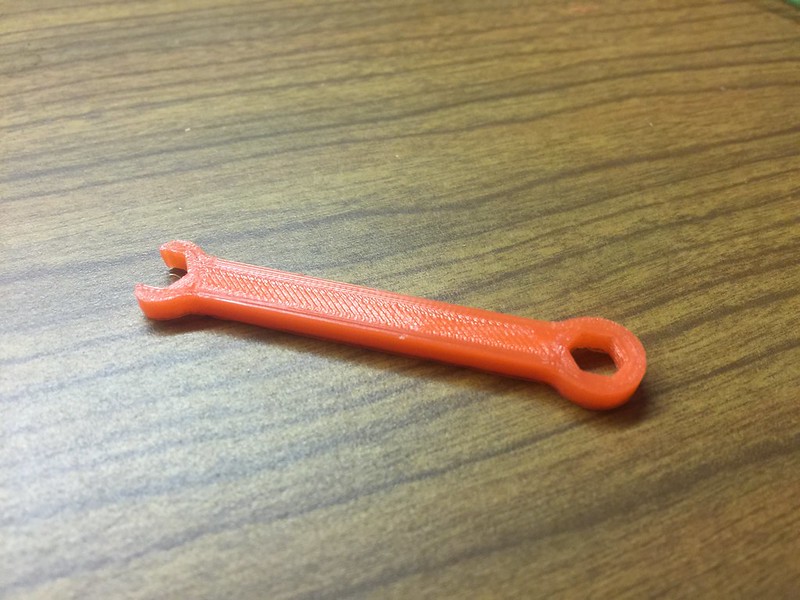 Oh… And here’s a link to my Photo Album for this episode.

The adventure continues in Episode 3.

This site uses Akismet to reduce spam. Learn how your comment data is processed.