I’ve been working out a tolerable dynamic DNS solution for myself lately. After much effort, I’ve settled on running my own bind server (I last did this like 12 years ago, hah). I’ve written simple scripts that handle it for me and they work fine. However, I found for many of my domains hosted by GoDaddy, I couldn’t get it to use my new nameservers. Godaddy would let me switch my nameservers, but then they’d revert to their previous settings and I’d get an email containing the helpful message:

END_OF_DOCUMENT_TOKEN_TO_BE_REPLACED

For those in the know, my mother’s mother has just officially turned 100!

This woman is one of the most impressive and interesting people I know.

A master-knitter amongst far too many more things to enumerate, she’s traveled quite the path thus far. Everyone on the family has at least several things she’s knitted and all those who visit her know she continues to keep a sharp mind!

Suffice to say a little blog post can’t possibly do this woman justice!

My aunt Connie, Grandma’s most recent child (heh), sent out a cool list of things that happened in 1911, the year Grandma Smith was born, I thought I’d post them here!

END_OF_DOCUMENT_TOKEN_TO_BE_REPLACED 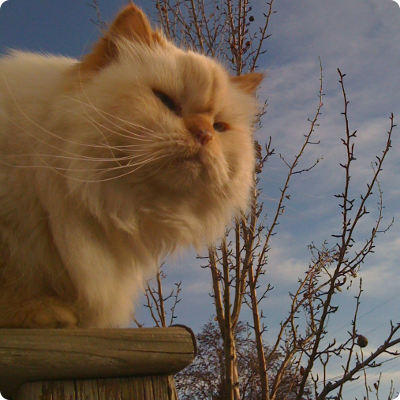 He sported a remarkable disposition unlike that of any other cat I’ve known. He expressed a vast range of positive emotions (with the occasional impressive act of disapproval). Jasper’s one of a kind character sets the bar for kitties everywhere and earned him an assortment of loving nick-names such as “Puppy Cat”. His grace is unrivaled and we will unquestionably miss him.

I am however delighted to have known him and thankful for the bizarre fortunes he enjoyed. This king of cats will remain comfortable and relaxed in the most treasured corners of our hearts.

END_OF_DOCUMENT_TOKEN_TO_BE_REPLACED

Well, a few of us Protospacers met up and worked out some more home-made cheap Printed Circuit Board progress.. Vast thanks to the help of my esteemed friend HappyThawts, we finally got out a board of usable quality! Woot! We used a single sided Arduino pattern I found (saved me some seri

All in all, it worked damn well. I’ve been getting ready to run a Protospace workshop on the topic for awhile now, so this particular attempt had been intended to be the first run through with a big group. But after several failed attempts at getting a usable PCB out of the process (and some other problems involving shipping stuff from China taking for FREAKIN’ ever), I decided to delay the first real workshop somewhat. Nevertheless, the results were great and I’m certain the next attempt will be a great deal better on account of the toner transfer used here was several days old and probably a lot more settled than toner that’s minutes old. 😀