I saw this post on Instructables where someone asked how they could add an LED on to a high-voltage source. And for reasons I can’t explain, I just felt compelled to take a crack at it…

END_OF_DOCUMENT_TOKEN_TO_BE_REPLACED

Well, with the priceless aid of my dear friend HappyThawts, I’ve managed to produce my first home-made Printed Circuit Board!

There were a bunch of weird issues that came up in making it and thus it’s not all that ideal, though I could hack it to work. The main challenge was that my copper clad boards were actually covered with PhotoResist (for masking boards via UV). The process we used entailed working directly on a layer of Copper. Thankfully Happy realized that Acetone would probably send the PhotoResist on it’s merry way to aqueous exile in my trash-chemicals bucket. She was dead-on there.

Another problem was that we used Ferric Chloride as our etchant, however, the particular solution I had on hand was given to me by someone cleaning out their closet a few years ago. It turned out that the Ferric we had was 12 years old! Happy informed me that it tends to lose it’s muscle over time, and the etching we did took a lot longer than it should have.

The process we followed is a well-documented method that’s meant to aid in cheap, rapid prototyping. There are many small variants on this process to choose from. I love the notion that I can come up with an idea and later that night have a working prototype built out. In addition to written instructions being a dime a dozen, there’s a ton out there and some good YouTube videos on it too.

In short the steps are:

Next I’ll be repeating this process, but using more appropriate boards and fresh Ferric Chloride. I expect this to work out really well and a few Google Searches on the subject will re-inforce how many people are making this work for them. I’ll blog on this in more detail as I continue on.

What would you make?

So, with this established, I’m wondering what kinds of boards people out there would use this process for? Personally, I’m a fan of making a bunch of Arduino rip-offs with it. In fact, the board I made this time is a single-sided Arduino board.

Well I’ve been home from Toor Camp 2009 for a week now and I’m feeling it’s about time to post my personal review of all of this.

Toor Camp was awesome as I met all sorts of cool people. It was awesome in that at night when the heat was reasonable, it was fun to go around to various camp sites and visit with random like-minded people. I had many conversations with people where we shared a sense of relaxation around the notion of being able to talk full-speed and in the way we generally thought and still be understood. I guess that’s just a perk of being around a bunch of people that have spent just as much time grinding on the same kinds of stuff.

There was tons of interesting stuff being setup all over. People were quick to share their creativity and ideas. I learned a fair bit about security topics, which I suppose is to be expected at a hacker conference. I presented my old usb mouse mod at a little late night event called Ignite Toor.

The heat was brutal. Most days were a few degrees over 100F/40C and several people from our group were overwhelmed by it. As such they spent a fair bit of time in idling cars with the AC on full, puking in a bucket. Personally I was just really overheated, but I didn’t get sick, possibly due to massive water consumption on my part.

Dust was rampant. The camp site was located in an extremely dusty place. The dust was a very very fine powder that would get in everything. It was a factor that everyone there had to just accept as there’s little you can do about that, especially when the wind picked up.

The Venue (a retired nuclear missle) silo was highly attactive when discussed in HTML, but when it came to in practice – I can’t know the full facts, but the result was the silo didn’t get opened until near the end of the camp. And once it was opened the coordinators offered a list of hazards like Asbestos, Lead Paint, Possible radioactivity (though quite unlikely), Poorly Lit Drop Offs and so on. I suppose that’s to be expected, but I didn’t really consider it before hand – once on site I wasn’t very motivated to expose myself to much of that sweetness.

The hilarious ugliness at the camp was surrounded by this remarkably foolish “Energy” company Levitate. In the future, if you see this name just think Lying Morons and you’ll be fine.

As a key part of a forced last minute deal by the site owner, the campers were forced to attend a concert put on by this company claiming to be preparing to launch it’s hybrid solar/wind power technology. The campers were forced in that their attendance was required if access to the silo was to be granted. That in and of itself was epic moronity in the only thing attracting people to that site was the silo, denying access at all was entirely confusing and made me wonder if there were potential liability issues that perhaps needed to be reconsidered.

Levitate posted the below freakin’ amazing bullshit facebook post for the event that was saturated with blatant lies about the camp and the campers therein endorsing their activities:

A group of the worldâ€™s smartest hackers will convene on July 3rd 2009 at a decommissioned nuclear missile site in the desert of Eastern Washington State. The goal: to solve some of the worldâ€™s most challenging issues through technology and to showcase a new large-scale renewable energy solution for the World.

Literally on top of a symbol that once represented global destruction, Levitate Energy and Tri-Film Productions present a renewable energy concert featuring the talents of Seattle bands Amber Pacific, Visqueen & Throw Me The Statue.

This is an invite only event but for more information contact Tri-Film Productions.

I could spend time explaining how this is all bullshit (except perhaps the fact that “Tri-Film” was involved too). But the short of it was as follows:

At the end of the day

At the end of the day I had a damned good time at Toor Camp 2009. I met a crap-ton of awesome people and had a great time learning, when I could take the heat.

I hope that as this was the first Toor Camp, the next one will secure a more suitable venue and for me that mainly entails much less dust, heat & drama.

Using the toys I’ve been enjoying ever so much lately, I’ve managed to really nicely smooth out the programming in my Arduino for my RGB LED. It’s so awesome that I’m given it a name! Meet the HypnoOrb!

At this point I only have the raw prototype, but I’m considering going ahead an making more of them. I have to work out pricing and smooth of some aspects of the design. If you’re interested in getting one, please contact me or post a message here – the more interest I see on this thing, the faster I’ll work at finding an inexpensive means of producing them.

Here’s the HypnoOrb source code for the Arduino environment.

The HypnoOrb’s name was inspired by our master, the HypnoToad. 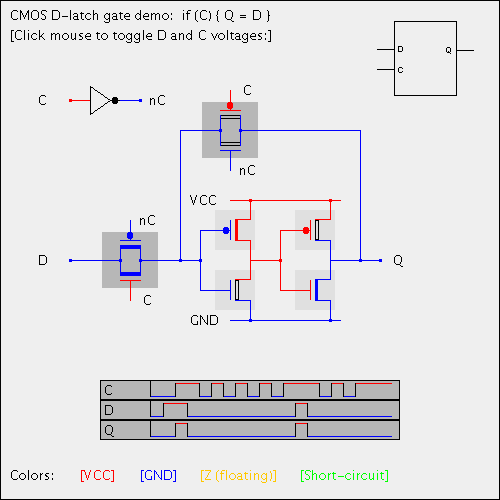 So I’ve been dragging my feet, trying to really wrap my brains around how nMOS, pMOS and the ever awesome n&p party called CMOS really get along, when I came across THIS freaking awesome page that really provided the illustration for how these things work that I’ve been looking for! The page that hosts this demonstration page I’m talking about is for some university in Hamburg, so I’m really thankful their page was written in English.

Anyone out there taking a course involving CMOS logic should really test/augment their understanding by taking a run through this page. It’s so freakin helpful!

For those who are bizarrely keen, the course I’m taking that relates to this is ENCM467 at the University of Calgary. Feel free to check out my notes for some vague scribblings related to this.