After getting an Apple Watch I decided to author an app for it. I was also re-watching Star Trek DS9 for the 50th time which means I kept hearing Quark (etc) recite the hilarious and disgusting Ferengi Rules of Acquisition. So I made it an app. 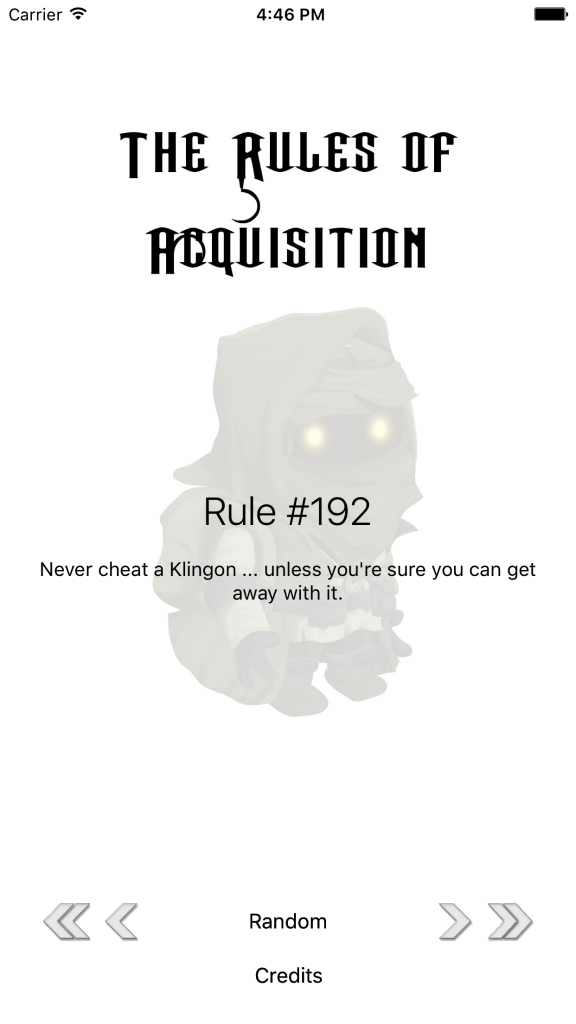 END_OF_DOCUMENT_TOKEN_TO_BE_REPLACED

Yesterday Apple introduced their massively anticipated iPad tablet device. For those who haven’t yet heard about it, it’s basically a hudge iPhone (that doesn’t make phone calls). The iPad is meant to unlock a “new” market segment for small computing devices that is somehow not already met by the iPhone and netbooks.

What does it do, anything new?

The iPad doesn’t bring new functionality to the computing world, but it does consolidate and simplify use particularly of eBooks. There have long since been many very cool eBook readers out there built around providing simple means for people to read electronic books.

With the release of iPad, iTunes will expand to include support for buying eBooks and of course that functionality will be easily available for regular computers and perhaps for the iPhone as well, unless Apple decides allowing that would result in you buying less stuff.

Beyond books, the iPad does all the stuff you expect from an iPhone. It runs the exact same applications (with rare exceptions), it will play back music and movies. Of course one major distinction is screen size. The iPhone’s screen is made up of 480×320 pixels where as the iPad provides 1024×768. So in the case of browsing documents, this will make a major difference. The iPad’s resolution however is like that of a standard TV – so all our new HD/widescreen content won’t fill the screen (unless you like cropping out much of the scene).

Like some of the better eBook readers, the high end iPad offers 3G connectivity. This enables those users to be connected to the internet via the cell phone network (like our smart phones). The sad part here is the extra ~$130USD for 3G is well on it’s way to paying for an Amazon Kindle or a Barnes & Noble Nook (both $260USD) which are optimized strictly for reading eBooks but both include 3G as well.