I’ve finally managed to get a version of Trash Talker published in to the Microsoft Store. This was based on the old STP code, but I made a number of improvements that make the app much better.

This app is a remake of a remake. The original app be the classic Shit Talker, by Jaundice. I enjoyed Shit Talker as a kid. I used to it call my friends and annoy them. (Given I’m a youngest sibling, it has been my classic duty to find creative ways of annoying others.) Trash Talker is a modernization of Shit Talker that tries to be a little cleaner, but stays quite true to the original. I have a few plans for things I’d like to add to this app, so check back every so often for updates.

Check out Trash Talker on the Microsoft Store.

Also – Trash Talker for macOS has been out for a while now too, so macOS users can grab it from the App Store. 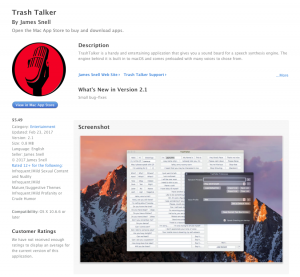 As you can see from the screenshot, it’s a window saturated with a mess of buttons. Each of these buttons are linked in to a speech synthesis engine, so when you press a button, the computer speaks whatever’s on the button.

I based this entirely off of the old Shit Talker by Jaundice, a well known, ancient but hilarious little program for making “prank” phone calls. I used this program back in the days of Windows 98 and if you try to run it now you’ll be met with general instability and ugliness (though you could run it inside a virtual machine). I was motivated to re-write it for OSX simply because that’s what I was using at the time and I wanted something I could run natively to do the same thing.

I actually had written a Java version of STP prior to this, but I had so many headaches in trying to bundle it in to something people would find easy to run that I eventually gave up on that version of it. Though I have goofed with the idea of resurrecting that project, but distributing it as a Java Applet and thus give people a web address they could go to in order to just run it out of their browser.

So what you think? Maybe you’ll have fun using this to call your mom and pretend you’ve become a robot? It’s always a good bet to use this when dealing with telemarketers too. What would you use STP for?

Posted via email from Doc Dawning